Hundreds of buildings have been burnt to the ground while roads are shut as firefighters brave thousands of acres of intense heat. 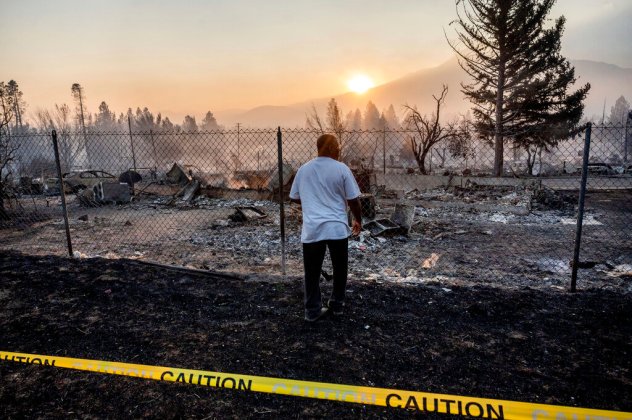 Two people died this weekend in Weed, C.A., in what is a rapidly-spreading wildfire which firefighters are still laboring round the clock to contain. Evacuation orders were given to residents of Siskiyou County, C.A. where the fire has so far consumed up to 4,200 acres.

Local government authorities said they still don’t know when residents will be allowed to return home safely or when power will be restored to much of the rural city of Weed. As of Sunday afternoon, the evacuation orders and warnings were lifted in only a handful of zones.

Both Siskiyou County and neighboring Modoc County were placed under a red flag warning on Friday with dry air and windy conditions promoting the rapid spread of fire.

California Government Gavin Newsom declared a state of emergency for Siskiyou County on Friday, adding that the state also secured a Fire Management Assistance Grant for the county.

“The grant will help ensure the availability of vital resources to suppress  the fire, which has caused civilian injuries and power outages, destroyed homes and forced thousands of residents to evacuate,” the office of Governor Gavin Newsom said in a statement.

So far, firefighters have managed to contain less than half the blaze, according to Cal Fire.

Roads Closed, Buildings Up In Smoke

A video released by the Montague Fire Department showed the Mill Fire burning buildings along Highway 97 as firefighters raced to the scene. Homes were pictured going up into a thick, black smoke on a balmy rural California weekend.

A portion of the highway that had been closed down due to the fire has since been reopened, but local authorities said that other roads within the fire perimeter are still shut to the public.

By Sunday afternoon, Cal Fire estimated that nearly five hundred building had been destroyed so far in the fire.

A heat wave on the West Coast is forecast to send temperatures soaring past 100 degrees Fahrenheit in the coming days, bringing additional heat risks to those evacuating.

“Unfortunately, Mother Nature will provide no relief for firefighting efforts in Northern California into at least the weekend,” AccuWeather meteorologist Reneé Duff said.

“High temperatures will remain near the century mark through the week, perhaps only dipping down to near 90 by the end of next weekend.”

Produced in association with Accuweather.

«Previous Post
Kay, Bearing Down On Mexico, Will Bring Flooding Rain To Southern California »Next Post
Queen Elizabeth II, An Advocate For Climate Action, Dies At 96