AccuWeather meteorologists are warning of the possibility a developing tropical cyclone in the Caribbean. 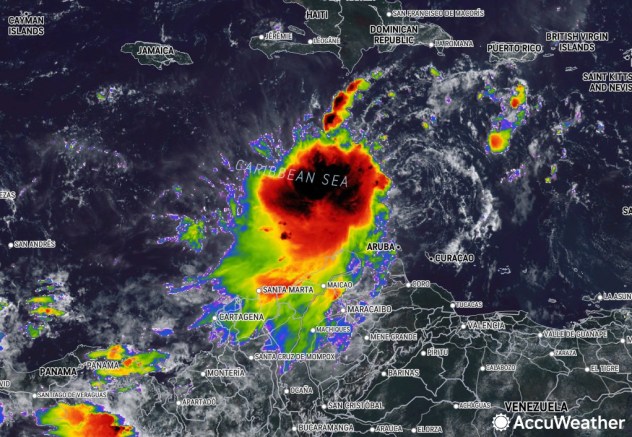 AccuWeather meteorologists are warning of the possibility a developing tropical cyclone in the Caribbean could undergo rapid intensification in the days ahead as it churns northward and the wind shear subsides, with its sights set on striking the west coast of Florida — historically an often missed target.

After making the trek from the Caribbean into the eastern Gulf of Mexico, the current forecast track of this brewing storm shows this tropical threat escalating into this season’s first full-fledged hurricane to impact the United States by the middle of next week.

According to a historical database provided by the National Oceanic and Atmospheric Administration (NOAA), there have been about 160 hurricanes, excluding tropical storms, that have affected Florida. Only 17 of the 160 have made landfall on the west coast, north of the Florida Keys.

Of those 17 hurricanes that have made landfall on the west coast of Florida, there is no record of a hurricane having tracked entirely up the west coast of Florida since records began in 1944. If the potential track of the storm stays along the west coast, it could be a “very unusual track,” AccuWeather Senior Weather Editor Jesse Ferrell explained, stating that most storms typically travel northeast or northwest, not up the coast.

“In fact, there was only one hurricane before 1944, a Category 5 hurricane in 1935, that hit the Keys then ran up the west coast,” Ferrell said.

Ferrell narrowed the data down even further to six of the biggest hurricanes to affect the west coast of Florida. While Tropical Depression Nine likely won’t follow the exact same path as any of these storms, understanding how previous storms made landfall on Florida’s west coast gives insight into comprehending how unusual Tropical Depression Nine’s track is right now.

Starting with the most recent, Hurricane Irma came crashing into Marco Island in southwestern Florida as a Category 3 major hurricane in 2017.

“Hurricane Irma took that extremely unusual north-northwest track up the western half of Florida as a Category 1, causing widespread damage in the state,” Ferrell said. “It was a wake-up call for west coast Floridians not [who were] prepared.”

Irma resulted in more than $320 million in damages across southwestern Florida, according to a report from NOAA.

Twelve years earlier, Hurricane Wilma took advantage of the warm Caribbean waters and low wind shear in the atmosphere and the storm underwent a record-setting and staggering period of intensification, strengthening from a Category 1 to a Category 5 hurricane in just 24 hours. After making landfall in Mexico, Wilma took aim at the Florida Peninsula, making landfall as a Category 3 hurricane near Cape Romano, Florida.

The aftermath was devastating. Wilma was the ninth-costliest hurricane to impact the U.S. in history, with a total estimated cost of more than $25 billion, according to the 2020 Consumer Price Index adjusted cost.

Just one year before Wilma wreaked havoc on Florida’s southwestern coast, Hurricane Charley left its mark. Charley made landfall just west of Cape Coral in 2004 as a Category 4 hurricane and was one of the most severe hurricanes to make landfall on Florida’s west coast.

It rapidly intensified from a Category 2 to a Category 4 hurricane just before landfall. After landfall, Charlie sliced through the center of the state and worked its way up the East Coast. By the time it crossed North Carolina, it had weakened into a tropical storm.

Charley was blamed for killing more than a dozen people in the Caribbean and the U.S. combined, with damages estimated to cost close to $17 billion.

Hurricane Gladys in 1968 and Hurricane Donna in 1960 both had similar tracks. Gladys made landfall as a Category 2 between the Florida Panhandle and Tampa, which is considered to be a rare track for any hurricane, much less a Category 2, Ferrell explained. Gladys sliced through northern Florida and continued as a hurricane to the Outer Banks, just off North Carolina.

Donna was one of the most destructive hurricanes to affect Florida in modern times, according to the NWS, which noted that there were 12 fatalities in Florida. Damage estimates have ranged from $36 million to $350 million.

Last but certainly not least, Hurricane Easy in 1950 was a “nightmare storm” for western Florida, according to Ferrell.

Hurricane Easy made its first U.S. landfall in Florida as a Category 3 hurricane, just north of Tampa near Cedar Key. It meandered around and made a second landfall 24 hours later in Spring Hill, which is about 55 miles south of Cedar Key, as a Category 2 hurricane.

Post landfall, Easy weakened into a tropical storm that continued north through Florida before becoming a tropical depression in Georgia and finally fizzling out in Arkansas.

Hurricane Easy dumped 38.7 inches of rain in 24 hours in parts of Florida and caused $3.3 million in damages, NOAA reported.

Once again, people along the Gulf coast of Florida, as well as elsewhere in the state, should remain vigilant and be prepared for a strike by a major hurricane in the days ahead, according to AccuWeather forecasters.