Residents of the northeastern United States can officially say goodbye to summer. 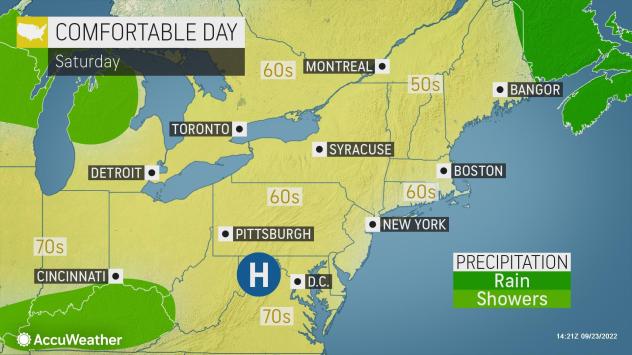 Residents of the northeastern United States can officially say goodbye to summer. AccuWeather meteorologists say typical fall temperatures and the risk of frost are in the offing for the region into next week.

A sweeping cold front on Thursday brought rounds of rain and gusty showers to many areas across the Northeast, setting up an abrupt change in temperature across the region on Friday, the first full day of fall. In some areas, it was so cold that it felt more like winter than fall.

Conditions were cold enough for some snow in portions of northern New York and New England early on Friday. Some of the highest peaks of upstate New York, including around Whiteface Mountain in the Adirondacks, received snowflakes and even light accumulations.

First snow of the season! Get your skis and boards ready, ski season will be here before you know it. Buy your lift tickets now for the best deals! pic.twitter.com/41ihPjsCtr

As Friday progresses, high temperatures are forecast to be only in the upper 40s and 50s from northern New England to central Pennsylvania. Portions of the mid-Atlantic will surge into the 60s.

The coldest air in months is likely to settle into the region Friday night and early Saturday morning.

Closer to the Eastern Seaboard, milder conditions are likely to keep temperatures in the upper 40s or even in the 50s early on Saturday morning.

More urban locations are likely to stay warm enough to avoid frost. However, more remote locations, especially the normally colder spots, could be at risk.

Dombek further explained that frost arriving this time of year is quite normal for the interior Northeast. Even still, experts say it could bring an end to the growing season for some local gardeners. Plants sensitive to frost or colder conditions should be covered or brought inside.

As the weekend progresses, typical fall conditions are expected to persist. Saturday is set to feature mainly dry weather with temperatures in the 50s and 60s in the afternoon.

Temperatures are forecast in the lower 70s closer to the Atlantic coast, including in cities like New York, Philadelphia and Washington, D.C.

For these cities, temperatures in the upper 60s and lower 70s are within a few degrees of normal for the final week of September.

The mostly dry conditions won’t last all weekend in the region. A storm moving in from the Midwest is set to bring a change to parts of the Northeast for the second half of the weekend.

Widespread showers are likely across to push into the area Saturday night, bringing in more clouds and keeping temperatures a little higher, which will minimize the risk of frost. The mild and showery weather is forecast to linger into Sunday.

“Ahead of the showers reaching the Interstate 95 corridor later in the day, warmer conditions can be expected on Sunday,” Dombek said.

As the front pushes through the area Sunday night, cool conditions will again return to the entirety of the Northeast by Monday and keep any summerlike warmth at bay into the middle of next week.