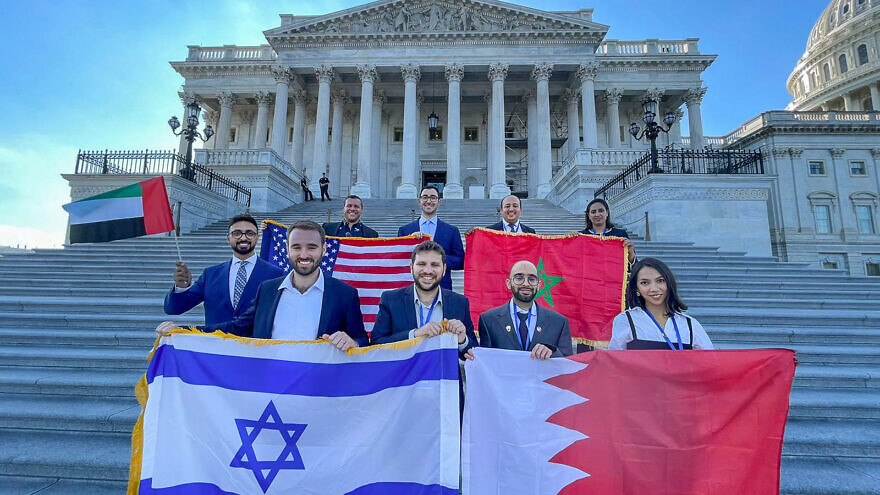 Two years after Israel, the United Arab Emirates and Bahrain signed the Abraham Accords on the White House lawn, a delegation of young professionals from those nations and Morocco—which later joined the accords—traveled to Washington D.C. to show how the agreements have given them the opportunity to meet and collaborate. The visit, which took place last week, was part of an initiative called “Leaders of Tomorrow”—a collaboration between the NGOs ISRAEL-is and the Mimouna Association of Morocco—that brought together leaders from Abraham Accords countries as private citizens looking for paths to cooperate on the people-to-people level.

In an interview , El Mehdi Boudra, CEO of Mimouna Association—an organization that works to preserve and promote Morocco’s Jewish Heritage, as well as foster dialogue between Muslims and Jews—said that the delegation is presenting the civil society part of the Abraham Accords to American leaders.

“We’re not representing governments, we are representing the civil society of our countries and how the young people of the region can build a better future for our region,” he said. “A region with peace where Muslims, Jews and Christians who live together. And I think the Abraham Accords offered an opportunity for us as young people of the region to build a better future and a different path from what we had known for several decades.” The delegation, which was supported by Voices of Israel and the American Jewish Committee, was made up of nine young leaders from Israel, the UAE, Bahrain and Morocco between the ages of 20-40, some representing their own NGOs.

During the week, the delegation met with officials from the White House, State Department, Congress, various think tanks, representatives of the European Union, philanthropists, students and leaders in the fields of academia and religion. The goal of these meetings was to demonstrate how, in just a few short years, the agreements have fostered cooperation and created hope for a peaceful future in the region. Matan Dansker, director of strategy for the program, said that one of the goals is for young professionals from member nations to unite and foster innovation within the new, open climate brought about by the accords. “The purpose is to take responsibility for peace, to make sure that they can bring it not only from the signed peace [agreement] but down to the human and citizen level, which is something that we believe is good for our countries, for the region and the entire world,” he said. “Especially for America, who is the initiator of these agreements.”

Majed AlSeyabi, founder of the UAE’s Abraham Youth Council, said the initiative meant a lot to him because the aim of the visit was to create meaningful connections. “We want to not only show the blooming business that’s already going on, but we want to show how people-to-people is really meaningful” and means “stability for both regions when it comes to warm peace.” Eyal Biram, founder and CEO of ISRAEL-is, said that the group, as young activists, see this as a historical moment and thinking of the future and that the group will discuss with American lawmakers how to help build more bridges.

AlSeyabi traveled to Israel to meet Dansker and Biram prior to the visit. Biram and Dansker have also been to the UAE for an influencer summit. But Hend AlJeeb of Bahrain said that, prior to this visit, she had never met an Israeli before. “Building cultural bridges of understanding, especially between Bahrain and Israel, I feel like most of us never imagined that this day will possibly come,” AlJeeb said. “And so, when I heard about the opportunity, I was extremely keen on joining and getting to experience it firsthand, as well as meet the delegates from the neighboring countries.” AlJeeb, a Fulbright Scholar and financial technology graduate student at the University of Central Florida, said she was working on developing an application as part of her country’s fintech sector that could help Bahrain, Israel and other Gulf countries address workforce gaps. According to the research she described during the interview, Israel’s high-tech sector is facing a labor shortage, so the normalization between Israel and Bahrain can provide opportunities for Bahrainis and citizens of other Gulf countries to temporarily move and lend their talents to Israeli companies. “I do believe that Bahrain has the talent to fill in that market gap between Israel as well as learn as much as they can out of the knowledge and research that Israel has to offer,” she said.

The delegates said that American lawmakers were excited to meet the group and see the results of their policy in the Middle East, especially because the Accords were initially doubted by some experts and lawmakers, but now have bipartisan support. “At least from the UAE and Israel and Bahrain and Israel [perspective], a group that couldn’t talk with one another a few years ago is now together in a delegation. Celebrating with members of Congress is a huge achievement for us as a region but also for American policy by and large,” Dansker said.

Boudra said that, prior to the Abraham Accords, Morocco had some relationship with Israel. At the time of the interview , the head of Morocco’s army, Lt. Gen. Belkhir el-Farouk, was in Israel to participate in a military conference. “It’s the first time that an Arab head of the military is visiting Israel as a friend, not as [an] enemy,” Boudra said. He added that the relationships that are forming between the young people in the member countries felt like another Berlin Wall coming down.

Biram said that there was an enthusiasm for learning about the other side, being able to access the cultures that were not accessible to any of them throughout their lives. It also creates the opportunity, according to Biram, to collaborate on common challenges. “It starts from the environment in the Middle East and of course global warming, into more specific ones about education, and about dealing with minorities. And each one of the countries sitting here has a specific profession in that part,” Biram said, adding that 20% of Israelis are Muslim, and each of the other countries has its own minorities or expatriates.

A criticism of the Abraham Accords from its opponents has been that issues surrounding the Israeli-Palestinian conflict were bypassed or ignored and despite the building rapport between Israel and the Arab members of the Accords, differences in opinion regarding the treatment of Palestinians still arise from time to time at international forums, especially when another conflict between Israel and the Palestinians escalates. But to members of the delegation, the Abraham Accords and the benefits they bring will likely withstand such tensions.

Boudra said that, at least in regard to Morocco, having a relationship with Israel does not mean that Morocco is against the Palestinians. “The Palestinian question is important for Morocco and Moroccans. And by communicating, we can help the Palestinian issue,” he said. “If you don’t talk with Israelis, you won’t understand the Israeli position. You won’t understand their need for security. And you won’t secure the Israeli people because the Israeli people need to be in a safe space, then you can discuss the Palestinian issue.” He added that the Israelis and the Palestinians need to solve the issue, but now, the Arabs could help find a solution. The other delegates agreed. AlSeyabi said that, in his view, the UAE sees the Accords as having saved the rights of the Palestinians. Dansker, whose father was wounded in a Palestinian terrorist attack, said that despite the Palestinian question, the Accords are a glimmer of light after years of pessimism. “No Israeli is thinking that the Palestinians are going anywhere. Ultimately, we have to solve that situation,” he said. “But the notion that somehow doing good in the region is avoiding other complexities is the reason why we were stuck for so many years. This boost of optimism can only do good for that conflict.”

Meanwhile, the delegates said that their nations were working on ways to strengthen civil society to understand the conflict and not put the Accords in jeopardy if violence reignites.

“I second [Dansker’s] opinion in terms of having a glimpse of light at the current stage doesn’t mean that we are avoiding certain problems. If anything, we do hope that this sort of collaboration will bring about peace between the Palestinians and Israel in terms of a two-state solution,” said AlJeeb. “So it’s not that we have forgotten them, not at all. And we do hope that there will be peace among these two states and we’ll be there hopeful, trying to encourage and ease communications if need be.”