“Our rocket artillery battery is successfully fulfilling combat missions to defeat the enemy.” 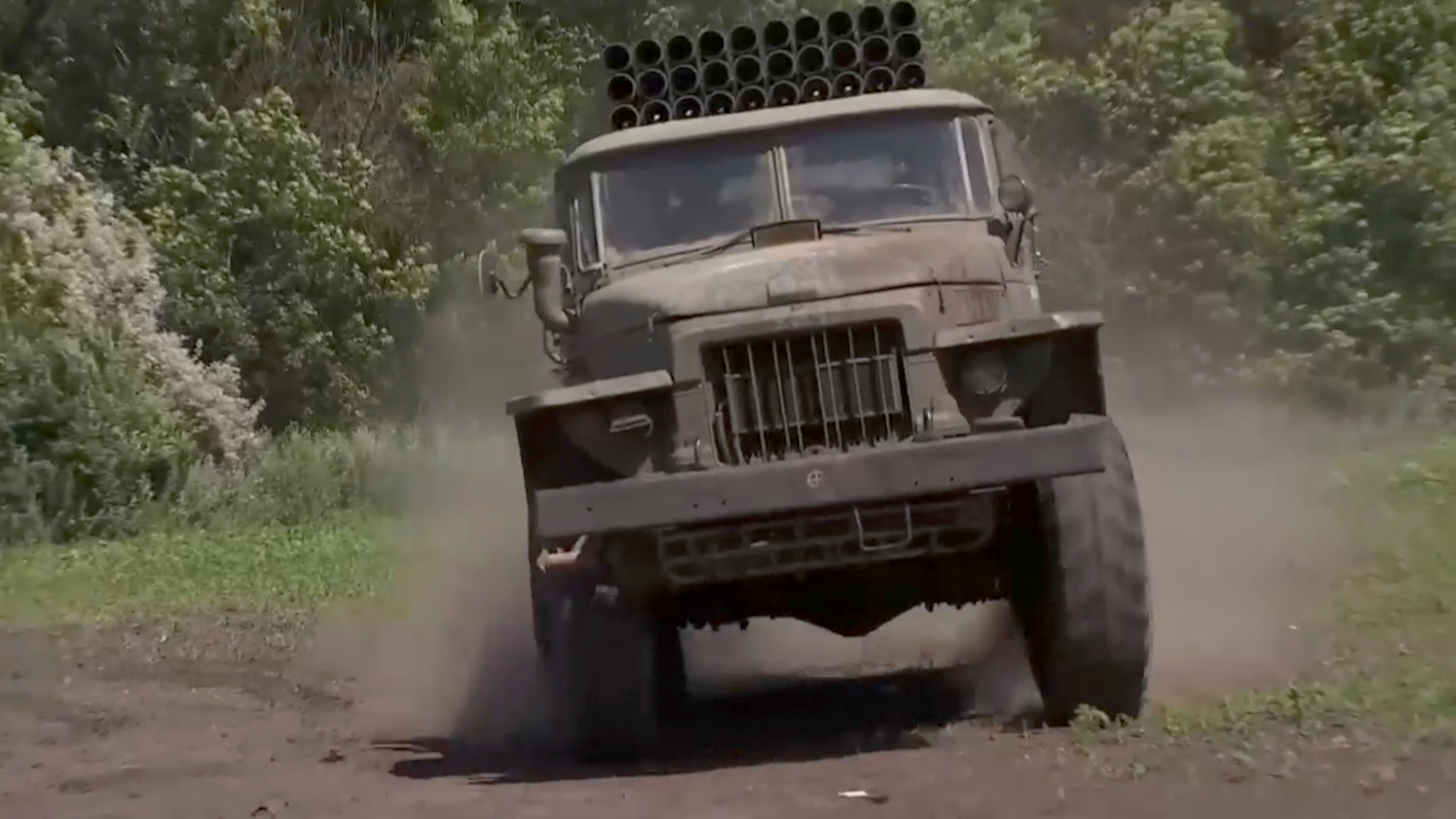 Russian soldiers deploy BM-21 ‘Grad ‘ vehicles and calibrate their targeting apparatus before they open fire, as these images show.

Apparently, one of the vehicles, sporting a ‘Z’ on its side, fired a salvo of missiles at unknown targets before moving to another location.

The ‘Z’ is one of the symbols, as well as the letters ‘V’ and ‘O’ that can be seen painted on Russian military vehicles taking part in the invasion of Ukraine.

In the footage, a soldier named only as Vladislav by Russian state media, says: “Our rocket artillery battery is successfully fulfilling combat missions to defeat the enemy. He does not sleep with us. Therefore, it is necessary to perform these missions at different locations.

“Accordingly, we often change our firing positions in order to prevent the defeat of our personnel and the destruction of our equipment.

“Therefore, we have to work in different conditions, day and night. We arrive, take up a firing position, determine several planned or unplanned targets, fold up and change our location. We are all accustomed to it, we are all trained. The staff is already trained. We do everything very quickly, everything is very maneuverable.”

The Russian Ministry of Defense claimed in a statement obtained on the morning of Monday, June 27, that the images show “the combat work of the crews of ‘Grad’ multiple launch rocket systems of the Western Military District in the performance of firing missions to destroy the positions of the Armed Forces of Ukraine.”

They added: “After the strike, the crews of the MLRS leave the firing position. The reloading of the MLRS BM-21 “Grad” is carried out in the reserve area, after which they move to a new firing position to strike at newly identified targets.

We have not been able to independently verify the Russian MoD’s claims or the footage.

We contacted the Russian MOD for further comment, as well as the Ministry of Defense of Ukraine, but haven’t received a reply at the time of writing.

Russia invaded Ukraine on February 24 in what the Kremlin is still calling a “special military operation.” June 27 marks the 124th day of the invasion.

At least 14 missiles have hit the Ukrainian capital Kyiv, according to Ukrainian officials. The strikes come as G7 leaders meet in Bavaria, in Germany, for a three-day summit. Military support for Ukraine is at the top of the agenda. The G7 is made up of Germany, France, Italy, Japan, Canada, the United Kingdom, and the United States.

Other missiles have reportedly hit the central city of Cherkasy, as well as the strategically vital port city of Odesa.

The United Kingdom and the United States, as well as Japan and Canada, are set to ban imports of Russian gold. British Prime Minister Boris Johnson said that the ban will “strike at the heart of Putin’s war machine.”

Last week, the European Union approved Ukraine’s application to become a candidate for admission to the bloc, which is currently made up of 27 countries. The decision was hailed in both Brussels and Kyiv as a “historic moment”, with President Zelenskyy saying that “Ukraine’s future is in the EU.”

Russian Foreign Ministry press secretary Maria Zakharova said that Moscow’s response to Lithuania banning the transit of goods, sanctioned by the EU, to Kaliningrad will not only be diplomatic but also practical.

But Lithuanian Prime Minister Ingrida Simonyte accused Russia of lying over the blockade, saying that people are still able to travel between Russia and Kaliningrad and that the blockade only affects 1 percent of goods.

Russia conducted an anti-ship missile exercise in the Baltic Sea amid escalating tensions with NATO member Lithuania after the latter country blocked the transit of some goods to the Russian exclave of Kaliningrad.