Survivors speak about the massacre of hundreds of students in Tlatelolco 53 years ago. 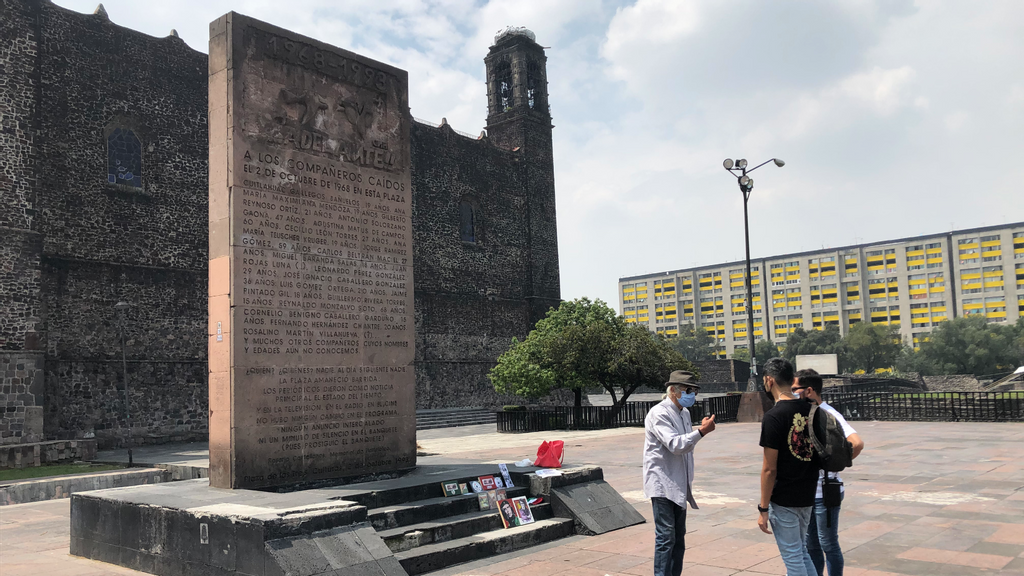 That day, members of the army and paramilitaries killed hundreds of students at a rally in Tlatelolco square, in Mexico City; 53 years later, the wounds remain open for survivors and in the collective memory.

Eugenia López Escamilla was a student activist from the National Polytechnic Institute’s (IPN) College of Medicine. She was 21, and collected money for the student movement. There had been protests all year, and violent repression from the police and military.

On the morning of Oct. 2, López Escamilla went with her colleagues to the Plaza de las Tres Culturas (Plaza of the Three Cultures) in Tlatelolco. The rally gathered between 6,000 and 15,000 people. López Escamilla said “the environment was tense” from the time she arrived.

The square’s name honors the three cultures present in the site: the indigenous pre-Hispanic, represented by the archeological remains; the colonial by the church and convent, and the modern by the tower that was the headquarters of the Ministry of Foreign Affairs until 2005 and a housing complex.

Around 6 p.m., two red flares were shot into the air. Dressed as civilians, soldiers and members of the Olympia Battalion — a secret security force assembled ahead of the 1968 Olympic Games — mixed with the crowd and opened fire.

“Comrades Florencio López Osuna, Sócrates Campos Lemus [former student leaders who died in 2001 and 2021, respectively] were delivering speeches when the crowd began asking, ‘What’s going on?’ As the first shots were heard, everyone began running. There was chaos,” López Escamilla told Zenger.

Immediately, López Escamilla fled the plaza along with a fellow demonstrator. She jumped off a six-foot-high platform and found refuge in one of the apartments of the multi-family complex located behind the Chihuahua building, where student leaders and speakers were meeting.

“People opened the doors of their apartments and allowed students in, in solidarity. We were about 25 people inside, in a little room. We were all lying on the floor. The bullets broke the glass. ‘Get down! Get under the tables,’ [the owners of the place] told us. Being there, I had a feeling of frustration. ‘Why is this happening?’ I asked myself. It was so unfair that they attacked us in that way. We were fighting for the ideal of change, and they brought tanks and bullets,” she said.

López Escamilla remained in the apartment for four hours, until midnight. Later, she made her escape. She found her brother and they both left for home, two and a half hours from the plaza. Unlike many students, the López Escamilla siblings were able to see their parents again.

They were lucky. The soldiers had broken into other apartments and opened fire on sheltered students.

Several days before the massacre, residents of the Tlatelolco area witnessed repressive incidents against students in the square. They frequently gathered at the plaza to discuss the actions of the student movement.

The events left a mark on former resident of multi-family building 11 Abelardo Figueroa. He remembers how his father, a doctor, provided medical support to several students.

The government “had used the public force against the students in a rally. Someone fired tear gas bombs to disperse them. My father came down to help young people who had been beaten or were injured … Another day, my father helped students inside our home. One of them had been beaten, and my father sutured his wounds to stop the bleeding,” he told Zenger.

The continued unrest in Tlatelolco and the deployment of the military in the Plaza de las Tres Culturas on Oct. 2 led the Figueroa family to make a last-minute decision and leave the building that afternoon, a few hours before the shooting.

“On Wednesday, at lunchtime, my mother received a call from my father, who was heading home from the hospital [where he worked]. She told him to pack and leave the place as soon as possible. He picked us up and took us out of the apartment before the rally began. We went to an uncle’s house, south of the city. That saved us from experiencing the tragic moments of the massacre that day.

“Days later, when we needed to return home, we realized that the military was still there. I remember seeing the floor stained with blood even after brigades of men with water pipes washed the place thoroughly. They brushed the areas surrounding the [nearby] high school, the tunnel and the square,” said Figueroa.

Mexico’s federal police chief Captain Fernando Gutiérrez Barrios reported that 26 people were dead, 100 injured, and 1,143 more arrested. However, according to reports from the U.S. National Security Agency that were declassified decades later, the number of dead was 350. Many families reported missing persons, such as the writer Elena Poniatowska, whose brother never returned home.

Gerardo Navarro, an archeologist at the National Institute of Anthropology and History, says that to understand what happened in Tlatelolco, it is essential to consider the historical context, including the Cold War, the U.S. troops in Vietnam, the Cuban Revolution and the Chicano student walkouts in Los Angeles in March 1968.

“There was a generational shift in the 1960s. The leaders of the Mexican Revolution, at the beginning of the 20th century, had a somewhat authoritarian way of controlling the youth. On the other hand, disciplines such as literature, philosophy and even music triggered a change in [the beliefs of] students, academics and civil society,” he told Zenger.

Events such as the violent repression against students after a fight on July 22, 1968, were triggers for the student movement that year, Navarro said. The students in the July incident came mostly from IPN’s high school 5 and the Isaac Ochotenera private high school, which was incorporated into Mexico’s National Autonomous University (UNAM) system.

Then-provost of UNAM Javier Barros Sierra condemned the represssion publicly. Students from public and private schools all across the country organized and created the National Strike Council. These events, along with public participation, bothered then-president Gustavo Díaz Ordaz and his administration, who had to show the world a different side of Mexico before the beginning of the Olympics, on Oct. 12, 1968.

“The Olympia Battalion was created by the [Díaz] Ordaz administration to protect the Games’ facilities. It was the first time that a Latin American country held the Olympics. As part of the American capitalist bloc, Mexico wanted to display its technological, social, cultural, political and economic advancement. The fact that some students were demonstrating a few days before the Olympics worried the Mexican government,” he said.

Despite the government’s attempts to thwart the student movement, the survivors of that violent attack, 53 years ago, still keep their hopes alive.

“The press was against us. It reported that we were lazy and communists, but we were neither. We had to fight for the idea of human rights to arise. Some opted for guerrilla fighting, others for the democratic path, others went to the PRI [the political party that remained in power for 71 years, from 1929 to 2000, under different names]. It’s good that some of us managed to survive, to keep looking for another option, a different government, social justice &mldr; Young people who are not revolutionary are not truly young,” said López.

Translated and edited by Gabriela Olmos; edited by Melanie Slone and Kristen Butler.