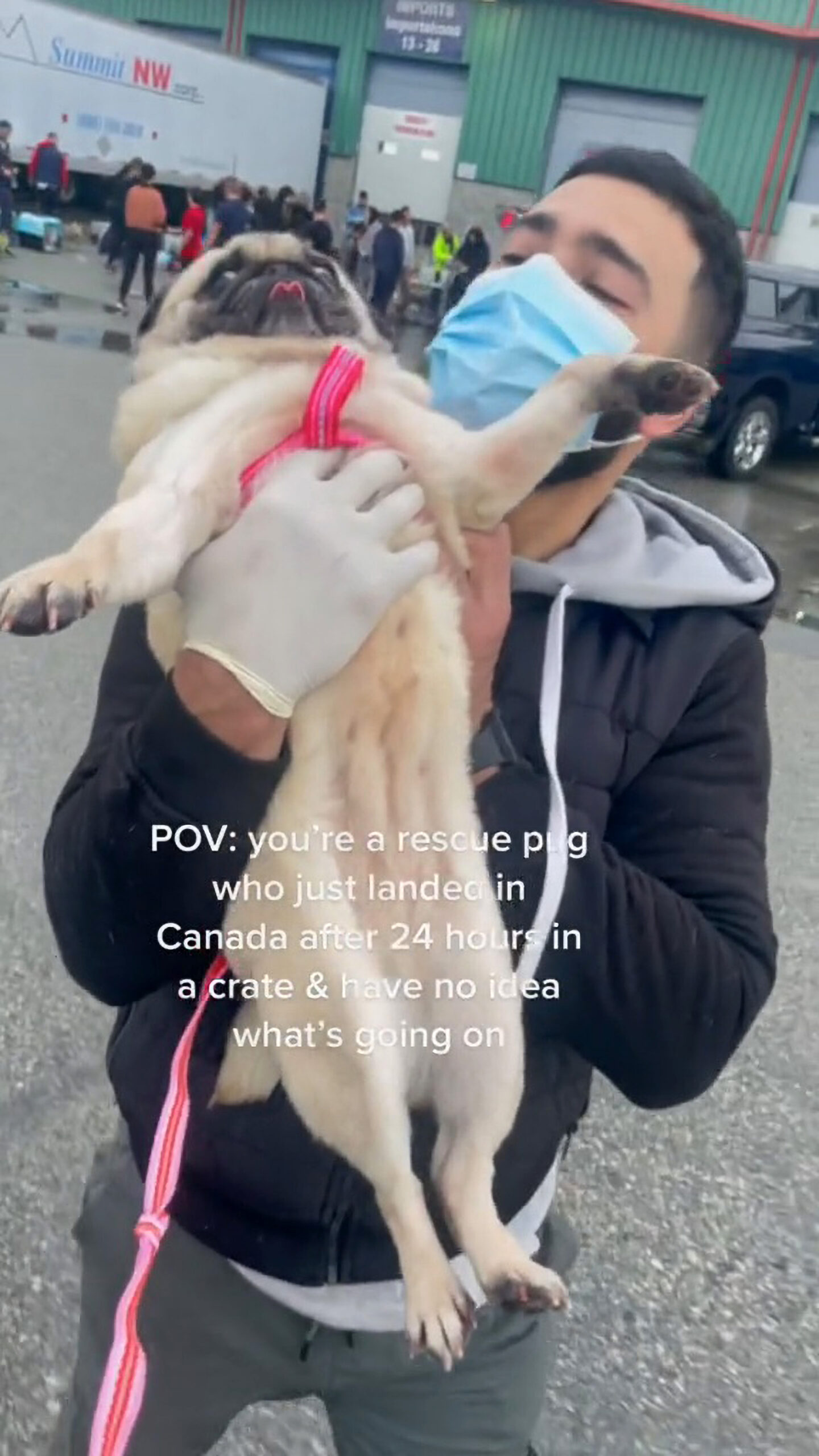 This is what a pug dog looks like after spending 24 hours in a crate on a flight from China to Canada.

The rescued pug’s amusing reaction to arriving in the Canadian city of Vancouver, a major city in the western Canadian province of British Columbia, has left TikTok users in stitches.

The amusing video shows Molly the pug being carried through Vancouver International Airport after spending 24 hours in a crate.

The caption reads: “POV: You’re a rescue pug who just landed in Canada after 24 hours in a crate and have no idea what’s going on.”

Molly was rescued from a Chinese puppy factory by the non-profit ‘The Pug Queen’ run by Izabella St. James from California.

Izabella said she rescued over 30 dogs from a “backyard dog meat butcher” and “puppy mill“ in China, adding that she works tirelessly to save the animals from a cruel fate.

Izabella said: “Molly was rescued from China in January. We rescued 32 pugs, French Bulldogs, an English Bulldog, and a Pekingese from a backyard dog meat butcher operation and a puppy mill in China.

“Dogs that are of no more use in breeding puppy factory operations in China are sold to the illegal yet existing dog meat trade. We intervene and save their lives.”

Izabella said her dedicated team works to rescue animals caught up in illegal activities abroad and Molly is just one of many they have saved from a backyard butcher or similar.

She said: “Because of the CDC ban, which banned dogs going to the USA from 131 countries, I was forced to fly 80 of our rescued dogs from China to Vancouver, Canada, instead.”

Despite rescuing hundreds of pooches every year, Izabella said it has become harder to find them new homes amid the cost of living crisis.

The Pug Queen said: “It is hard in this economy with adoptions down and donations down.”

However, Molly is currently doing well with a foster family in Vancouver as the non-profit looks to find the pug a forever-home.

Izabella said: “She does not have a home lined up yet, but we hope she will soon. She deserves to be loved and cared for, she has waited a long time for this happy ending.”

«Previous Post
Cowardly Cat: Nervous Sherlock Hides In Cupboard When Anyone Comes To The Door»Next Post
Death Bed: Fulfilling OAP's Dying Wish To Find Child Actress Who She Starred With In 'King And I'