On Flag Day, a look back at how Old Glory has battled dangerous weather and lived to tell the tale. 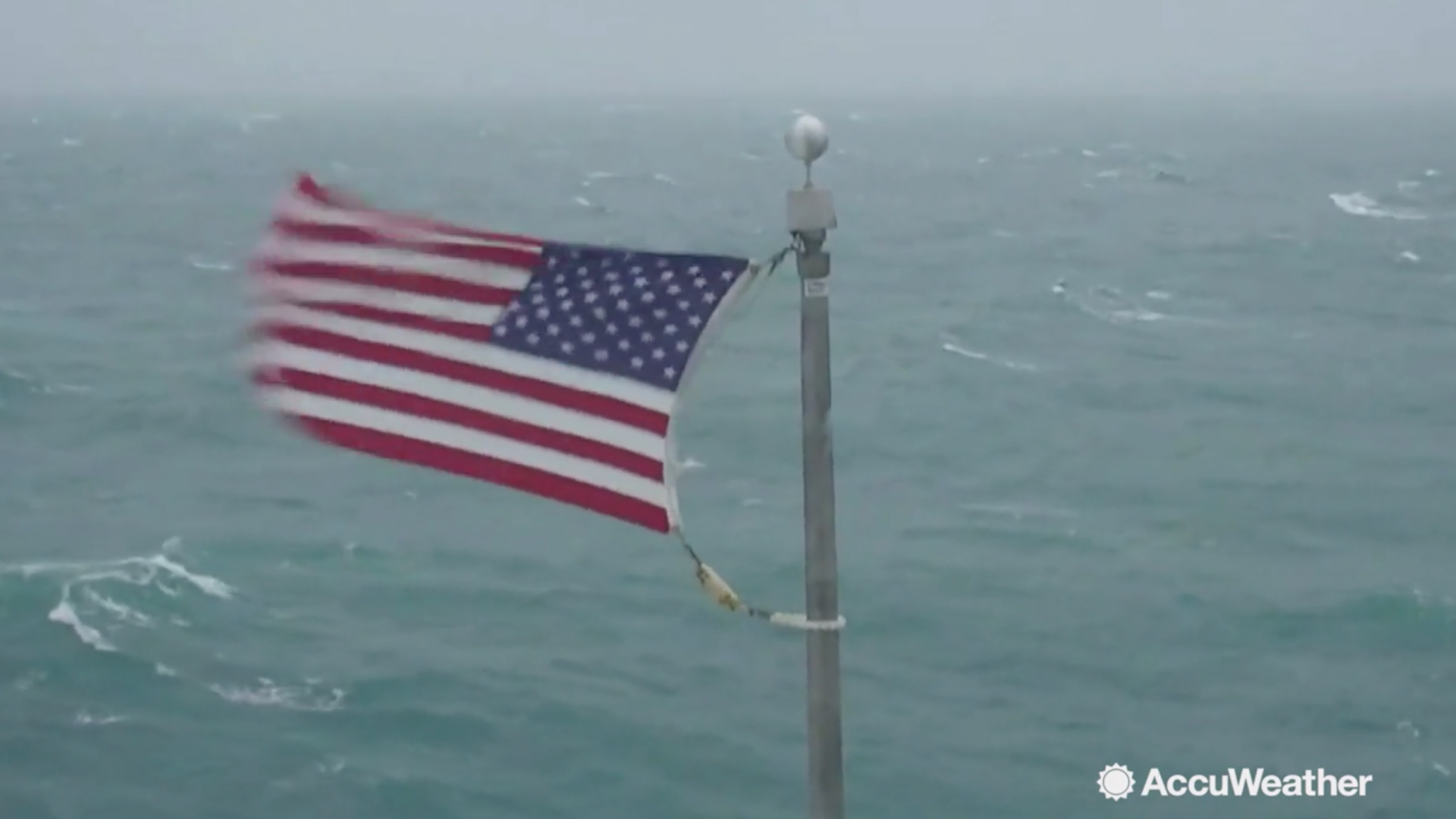 Since its official adoption on July 14, 1777, the American flag has been through many of the United States’ most important historical moments. That storied history includes some of the most powerful weather events known to humanity, and Old Glory has managed to escape many of these storms by the skin of its teeth.

In recognition of Flag Day, which commemorates the anniversary of the American flag’s adoption by the Second Continental Congress, this article includes just five of the many severe weather events that the Stars and Stripes have survived since they were formally selected to represent the United States 245 years ago.

Hurricane Dorian became one of the Atlantic basin’s most powerful storms ever as it pounded the Bahamas and parts of the United States Southeast coast in 2019 with winds up to 185 mph.

As the storm moved off the North Carolina coast as a Category 2 storm, an American flag on Frying Pan Tower, a structure 34 miles offshore of Cape Fear, was impacted by strong winds. The flag, which appeared to be holding on for dear life, nevertheless managed to stay intact even as winds in the storm reached up to 110 mph.

In preparation for the storm, North Carolina had declared a state of emergency, with three people dying from the storm in the state, according to reporting by The Charlotte Observer. Across the storm’s entire lifespan, at least 84 people died, with another 245 people missing, mostly in the Bahamas, where Dorian caused widespread devastation as a monstrous Category 5 storm.

Firefighters in Los Angeles County saved an American flag from the Lake Fire, which scorched buildings north of Los Angeles in 2020 during the middle of August.

A crew of firefighters from Engine 164 took time out of their fight to rescue the American flag from near a destroyed structure north of Los Angeles before embers from the blaze could set Old Glory aflame. As the fire drew near, with flames lapping in the background and what looked like structures burning, the firefighters gently lowered the flag off its pole and took it back with them, preserving it for another day.

“Even as we battle fast-spreading flames and dangerous conditions, our members continue to serve with respect and honor,” the fire department wrote on its Facebook page.

A late-season blizzard in Amarillo, Texas, on March 17, 2021, produced intense winds of up to 64 mph and multiple hours of heavy snowfall. It also pushed a flag in the area to its limit, with the red, white and blue waving strong during the intense conditions.

The wind and snowfall combined to form near-whiteout conditions, obscuring the view of the flag even from close range. The storm made for dangerous driving conditions in the Texas Panhandle, with numerous accidents reported by authorities.

According to the National Weather Service, the short but intense storm dropped up to 8 inches of snow in the Texas Panhandle, with drifts of 2-3 feet of snow forming in some spots. Drifts that tall might have allowed those standing below the flag to reach up and touch the stars and stripes from the ground.

As Hurricane Matthew paralleled Florida’s East coast beaches in 2016, delivering heavy rain, damaging winds and storm surge, one Florida man decided that he would take matters into his own hands. Wielding an American flag, the man took to the streets to seemingly challenge the hurricane itself to a manliness duel.

Lane Pittman, from Jacksonville, Florida, grabbed his American flag, took off his shirt, and ran into the streets whipping his hair around in the wind as music from thrash metal band Slayer played in the background.

The powerful winds from Matthew tossed both Pittman’s hair and the flag, which was a weakening Category 3 storm as it blew by the Jacksonville area.

“Had a request for some hair action during the ‘cane. I granted it,” Pittman wrote on his Facebook page.

As the Glass Fire burned through California’s Wine Country, firefighters with the Fremont Fire Department managed to save an American flag from the Fairwinds Estate Winery in Calistoga, which is part of Northern California’s famed Napa Valley.

The dramatic rescue, which took place with flames just feet behind the firefighters, occurred in the early morning hours of Sept. 28, 2020. While the heroic firefighters were able to save the flag, the winery itself burned down.

“We did what we could with what we had to limit the losses,” the firefighters said in a statement posted to Twitter. “Even though we weren’t able to save the building, we never gave up. We were able to save the flag and stay in the fight. Several properties were saved that night. The flag gave us the pride to keep going when things were at their toughest.”