Indian ruling party hit out at Delhi Chief Minister over India’s first smog tower, accused him of “mastery in lying”. 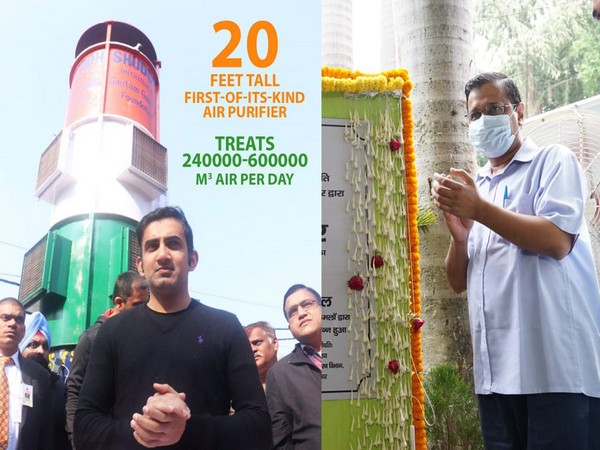 “Congratulations, Delhi. In the war against pollution, the country’s first smog tower was started in Delhi,” tweeted Kejriwal.

“This smog tower made of American technology will reduce the amount of pollution in the air. If the results of this project started on a pilot basis are better, then more such smog towers will be installed all over Delhi.”

He said that they have installed India’s first smog tower in Delhi to fight pollution, and the technology was imported from America.

“This is a 24-meter tall tower, will clean the air of one-kilometer (0.62 miles) range, will pull the air from above and release it downward, and will release 1000 square meters per second,” said Kejriwal.

Kejriwal said that the pollution levels have reduced since 2014 due to the efforts of his government.

“Now the level of Fine particulate matter (PM) 2.5 and PM 10 has come down significantly,” he said.

Indian ruling party, Bharatiya Janata Party, on Aug. 23, hit out at Kejriwal over his remarks that India’s first smog tower had been inaugurated on Monday and accused him of “mastery in lying.”

The party said that the party’s Member of Parliament from East Delhi, Gautam Gambhir installed Delhi’s first smog tower in 2020.

They also accused the Chief Minister of misleading people.

“Chief Minister Kejriwal has done mastery in lying. Stop misleading the people. They know all your dirty tricks. You’re a credit seeker, rest you’ve done nothing for Delhiites. Wake up from the slumber!”

The Bharatiya Janata Party shared an image of Gautam Gambhir with the first-of-its-kind 20 feet air purifier.

Gambhir said in November 2020 that east Delhi’s third air purifier had been installed.

“Work is seen. Lies have to be shown. East Delhi’s third Air Purifier! Everyone’s right to clean air!” he had tweeted.

“Another state-of-the-art AIR PURIFIER in East Delhi. Have to do more than banner & ads at every traffic signal to help Delhi breathe free!” he had tweeted in November 2020.

The claim and counter-claim triggered a political row on Twitter, with netizens actively debating and taking sides.

“The whole party is filled with liars. Is it Aam Aadmi party or Jhoote Aadmi Party,” said a Twitter user.

“It is a toy of INR 5 lakh ($6.7 thousand) and not a smog tower,” said a supporter of the Aam Aadmi Party, significant opposition of the Indian ruling party.

“Just because Gautam Gambhir decided to call his toy air purifier as smog tower does not mean everyone can be fooled.”

There has been widespread concern over pollution levels in Delhi.