The Pentagon is racing the clock to rescue as many Afghans from harm’s way as possible. Ramstein in Germany is their first stop. 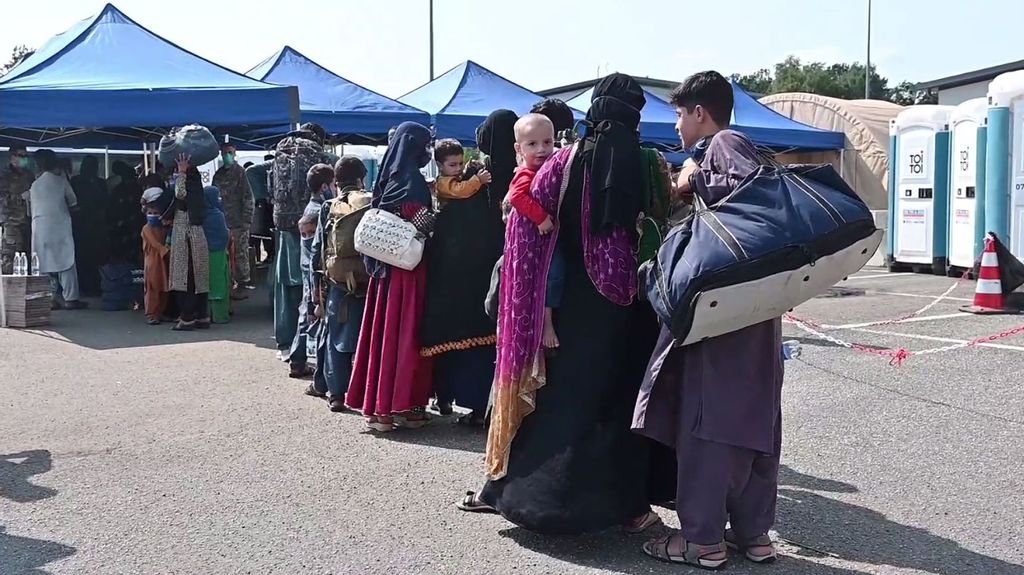 For the thousands of Afghan refugees boarding mammoth U.S. military aircraft to flee Kabul, an American airbase in Germany is their first stop. They can’t stay longer than 10 days, according to the Pentagon, citing an arrangement with the German government.

But temporary lodging, medical and logistical support at-risk Afghans at Ramstein Air Base. About 5,000 have arrived so far, according to U.S. European Command.

“Qualified evacuees will receive support, such as temporary lodging, food, medical screening and treatment and more, while housed at the Rhein Ordnance Barracks,” the command said in a statement, underscoring that “their final destinations” will be someplace else.

Operation Allies Refuge, as the quickly assembled plan is called, uses cavernous airplane hangars for lodging space, along with large tents that can hold more than 40 beds apiece.

While some U.S. citizens are still being flown out of Kabul, Afghanistan’s capital city, most of the passengers now are Afghans who are applying for Special Immigrant Visas based on their years of cooperation with the U.S. State and Defense departments.

Video of the evacuation from Aug. 22 shows throngs of evacuees piling into a US. Air Force aircraft and later being processed at Ramstein. Other footage shows U.S. military personnel preparing for the refugees’ arrival.

U.S. European Command said Monday that a pregnant woman went into labor aboard one rescue flight. The pilot descended to a lower altitude to help stabilize the woman’s blood pressure, the command said, and safely landed.

“Upon landing, Airmen from the 86th MDG [Medical Group] came aboard and delivered the child in the cargo bay of the aircraft. The baby girl and mother were transported to a nearby medical facility and are in good condition,” the command said.

The Taliban, a faction of Afghan Islamic fighters, surprised the Biden administration by taking control of their country just days after the U.S. followed through on President Joseph R. Biden’s promise to withdraw American troops.

Biden announced the drawdown on April 1, a month ahead of a May 1 deadline his predecessor Donald J. Trump negotiated with the Taliban. “Our military mission in Afghanistan will conclude on Aug, 31.  The drawdown is proceeding in a secure and orderly way, prioritizing the safety of our troops as they depart,” Biden said July 8.

The Taliban took control of key cities by Aug. 12 and ruled Kabul three days later. President Ashraf Ghani fled the country on Aug. 15, carrying an estimated $169 million in cash with him. Tens of thousands of people rushed to the airport, fearing for their safety.

Biden said in an Aug. 22 address that there are other groups of people flying out of Kabul, in addition to U.S. citizens and Afghans who helped the U.S. and its allies during a two-decade war.

“Our first priority in Kabul is getting American citizens out of the country as quickly and as safely as possible,” Biden said.  “We’ve also been evacuating the citizens of our NATO Allies and our partners, including their diplomats, their embassy staff who remain in Afghanistan and to get them back to their homes as well.

“In order to keep a steady flow of planes taking off from Kabul and maximize our evacuation capacity, we have quickly stood up an unprecedented global effort and established a series of processing stations in third countries.”

The Biden administration estimates that more than 50,000 Afghan nationals still expect to be evacuated, along 15,000 more Americans.

«Previous Post
India Approves Zydus Cadila’s DNA-Based Vaccine For Emergency Use For 12 And Above »Next Post
Afghan Military Officers: We Fought Hard But Biden “abandoned” Us