Jawsome! How Freediver Lou Conquered Her Fear Of Sharks And Now Swims With Great Whites

Argentinian restored her physical and mental health with yoga and freediving. 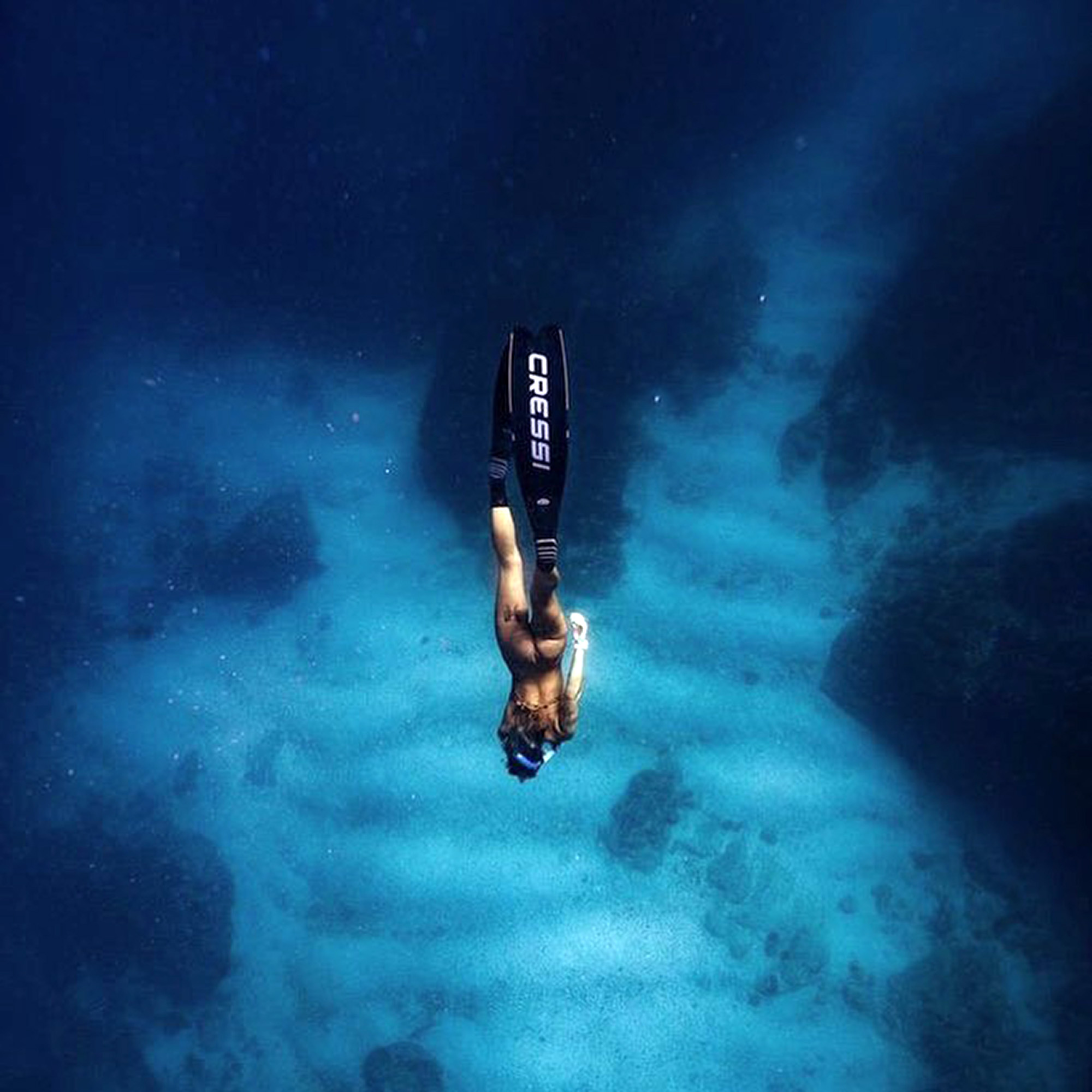 An Argentinian woman conquered her fear of surfing near sharks by engaging in a controversial extreme sport: freediving.

Freediving or breath-hold diving is diving at an average depth of 20 feet — but without the breathing apparatus scuba-gear divers use.

“One of my biggest motivations to move here was to learn how to surf, and I couldn’t do that from the sand,” she said.

“That’s how I started swimming every morning from Manly to Shelly Beach and back [about a mile] with a group of swimmers. I thought this would help me get over the fear, so I could eventually learn how to surf. That was how I fell in love with open-water swimming.”

“During the winter, many Grey Nurse Sharks started coming to the bay. One day my swimming coach told me he had a surprise for that swim. The surprise was two 3 to 4 meters (10 to 13 feet) sharks in our swimming spot.”

“I was surprised I wasn’t completely freaked out about the sharks when we found them. They looked peaceful. And, from the surface, they didn’t even look big. I tried to go under the surface and get closer, but as soon as I got close, I had to come up, I didn’t have enough air, and my ears felt like they were going to explode.”

A friend told her about freediving and once she discovered it, her fear of sharks disappeared.

“A few days later, a friend showed me videos of her swimming alongside them. She’s a freediver. I didn’t even know that was a thing. Before I knew it, my greatest, most irrational fear … was not only gone, but drove me to the ocean every day.”

Scuba diving and freediving help people overcome their fear of sharks by teaching them that many of the sharks have no interest in people or are even afraid of them. Shark attacks happen in and around fishing areas. Instructors say the attack is a defensive bite as the shark is trying to escape a net or hook.

Diving also offers less exposure to such attacks. Only 4 percent of shark bites happen to divers, while 61 percent to surfers, according to the 2020 International Shark Attack Report.

“I booked my first freediving course in December 2020, and I’ve been diving almost every day since,” Villegas said. “I don’t think I’ll ever get tired of watching fish swim around and even the seagrass sway with the tides and swell.”

That doesn’t mean the sport is devoid of danger.

Shallow-water blackouts — which is loss of consciousness caused by cerebral hypoxia at the end of a breath-hold dive — are a frequent cause of death for freedivers. One in 500 divers loses his life during recreational freediving, according to the Australian Freediving Association.

Recreational freedivers can hold their breath from two to more than 10 minutes. Budimir Sobat from Croatia broke the record on March 27 for the longest time breath was held voluntarily by a male: 24 minutes 37.36 seconds, according to the Guinness World Record.

For Villegas, some dangers are offset by the joys — both visual and spiritual.

She said the most spectacular thing she had ever seen underwater was a Great White Shark — once her biggest fear.

“I was in Lady Elliot Island, freediving with three friends. As I was coming back to the surface to take a breath after swimming with a manta ray, in the distance, maybe 10 meters away (32 feet), I saw a big silhouette with the distinctive weird grin of the King of the Oceans. I thought I was hallucinating. A few breaths later, one of my friends came over and whispered: ‘I think I just saw a Great White Shark,’”

“The most feared creature in the ocean had been in proximity to us and had swum away, with no real interest in us. I can cross out the most magnificent predator alive off my bucket list,” she said.

Villegas is working as a yoga coach. The practice changed her life.

“I was a different person back then. Life, toxic relationships, lack of self-esteem, overworking got the best out of me. My body just told me to stop. My body got sick of talking to me and not being heard. So it started screaming. My body’s screaming voice is called fibromyalgia [a condition that causes pain all over the body].“

Apart from the sharks, one of her most memorable swims was with seals in Narooma, a town in the Australian state of New South Wales.

“There is a huge colony there, and I went with other 24 freedivers. It was one of the most fun experiences I’ve ever had. For me, freediving is almost a spiritual experience, a connection with your breath and the environment,“ Villegas said.

“When you dive with seals, this experience changes completely. It’s like going for a play in the park with a pack of Labradors. They swim, twirl and spin around. It made me want to imitate and play with them.

“The first interaction I had with a seal was a bit scary — it charged directly toward me with full-on speed … but when it was a few centimeters away, she changed directions and eluded me. I understood this was their way of playing, so I started playing in the same way.”