Grassroots Memorials Remember U.S. COVID-19 Deaths, While Push Is On For National Monument

Activists seek landmark to honor the dead and educate a future public about the trauma victims and their survivors endured. 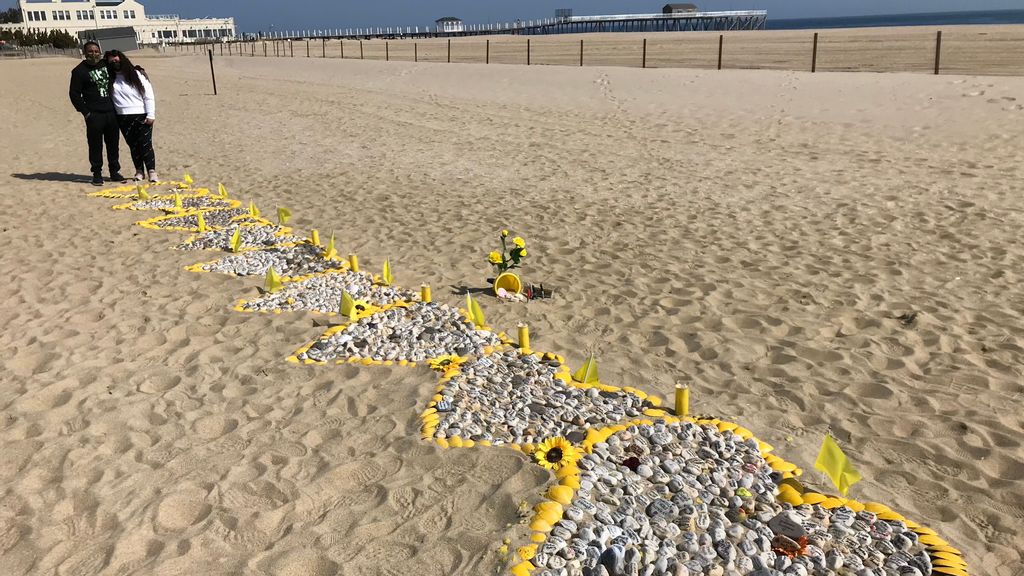 The number is sobering: 611,000 U.S. lives (and counting) lost to COVID-19. The question is: How do you commemorate such a national tragedy?

Various memorials have been created to remember the dead, more than nine times the number of U.S. soldiers who died in the Vietnam, Afghanistan and Iraq wars combined.

Too often, the pandemic prevented traditional death rites, diminishing the individual stories of COVID-19 victims. So families and artists created new ones.

From handcrafted roses to stones on the beach, local memorials honor those who died of COVID-19, driven by grassroots organizations helping survivors process their grief. And the response has touched thousands nationwide. It’s also kick-started political action.

On the East Coast, Rima Samman of Belmar, New Jersey, honored her brother on what would have been his 41st birthday in January with Rami’s Heart Memorial. She knew she wanted to paint seashells and planned to create a yellow heart on Belmar Beach, denoting a lost loved one. She added a stone in the middle of the heart with her brother’s name on it.

She then posted to her local Facebook group, offering to add more names to the heart and inviting people to a lighting ceremony the next night. She received 100 responses, and 20 people — almost all strangers — came.

Then a photo of the lighting ceremony circulated on social media. Suddenly, hundreds of requests poured in for days. Samman had expected to clean up the memorial after a week, once the first heart filled up. Eventually, she had over 3,000 names, enough to fill 12 hearts.

Another grassroots memorial was launched on the West Coast. “You can model grief, as a sculpture almost,” said Marcos Lutyens, the Los Angeles-based artist behind the Rose River Memorial.

The Rose River Memorial comprises hundreds of thousands of red handmade felt roses, each representing a life lost to COVID-19. Supporters nationwide send Lutyens boxes of roses, which he installs in different cities around the country.

“Thinking about how to model grief and transform is key to my role in this as an artist,” he said.

The next installation is slated for July 29 through August 1 at the LA Arts Show. About 10,500 roses will be on display at the entrance to the LA Convention Center, which served as a COVID-19 field hospital.

When Lutyens started in August 2020, there were about 150,000 COVID-19 deaths in the U.S. He said he watched “in horror” as the death toll grew, but resolved to continue honoring each life with a rose. “However many roses we make, every rose we make has a special power and meaning,” he said.

When Rami’s Heart Memorial grew to four hearts, a storm caused the tides to rise enough overnight to pull a few stones out of the hearts, including the one with Rami’s name on it.

Samman said she looked desperately for her brother’s stone the next morning. When she finally found it buried in the sand, she cried. “I thought, I can’t believe I’m crying over a rock,” Samman said. “My partner said, ‘Now you know why it means so much to other people.’”

That’s when Samman realized she couldn’t just clean up the memorial. She registered Rami’s Heart Memorial as a nonprofit and raised enough funds to transfer all 12 hearts into shadow boxes. It recently found a permanent home in Wall, New Jersey, where the group plans to build a garden around it, making it one of the first officially permanent COVID-19 memorials.

The monument now carries names from all over the country and a few from overseas from people with ties to Belmar Beach. Samman, a COVID survivor, accepts names from any location.

She is also one of many activists who headed to Washington, D.C., on July 26 as part of COVID Lobby Days, organized by Marked By COVID, a nonprofit organization that says it is “promoting truth, justice and COVID science.” Marked By COVID is joined by 15 other groups in D.C., including Rami’s Heart Memorial and the Rose River Memorial.

In addition to hosting a vigil and displaying some pieces of the memorials created by the groups attending, the activists will lobbying for the passage of House Resolution 174, which would designate the first Monday in March as COVID–19 Victims and Survivors Memorial Day. The resolution is sponsored by Rep. Greg Stanton (D-AZ), who has expressed support for and collaborated with Marked By COVID.

COVID Lobby Days is also pushing for the creation of a nonpartisan committee to investigate the pandemic response, rather than the bipartisan committee that would be created by legislation Rep. Andy Barr (R-KY) reintroduced in March.

“We really don’t want it to be pointing fingers,” said Tara Krebbs, the Arizona hub lead at Marked By COVID. “That’s what happened the whole pandemic. The anger definitely is there, but it’s not what’s going to be productive moving forward. I’d rather make a difference than scream and yell.”

“I just want to tell [McCarthy] my story,” said Aileen Brooks, an activist involved in both Marked By COVID and the Rose River Memorial. “There are so many people who are suffering in different ways. Something needs to be done, so these people don’t lose their quality of life.”

Brooks, who lost her father to COVID-19, said support for those affected by the pandemic must include continued aid for people who have lost their jobs or their homes, people struggling to pay rent and people who have ongoing health conditions after recovering from COVID-19.

“I just feel like this all can’t be forgotten about and swept under the rug. People need to learn from this,” she said.

Brooks will be representing the Rose River Memorial in D.C. by wearing a piece of it — a long, sweater-like garment adorned with felt roses and ribbons with the names and death date of many Marked By COVID members’ loved ones.

So far, the Biden Administration has been quiet on the subject of a national COVID-19 memorial, but grassroots groups are pushing for one.

“Our efforts should be listened to and paid attention to because otherwise you get your A-list architect coming in and creating something that’s not connected to the community,” Lutyens said. “If the Biden Administration supported permanent memorialization, it’s not enough to do a big one in D.C. that people see from time to time, but rather, many that scale to each city and town’s loss and character.”

Lutyens said he could imagine a memorial that combined some kind of physical presence with augmented reality. Doing so would allow the memorial to change and adapt, and better capture more of the stories of those who have died.

The memorial activists also face the politicized aspects of COVID-19.

Lutyens himself ran into resistance when trying to install pieces of the Rose River Memorial in the Rio Grande Valley. No one would allow him to put up a memorial, he said, so the group rented a refrigerator truck to display the roses in and commissioned local artists to paint murals on the sides. The project was done in collaboration with two sisters who lost their father to COVID-19.

“The impulse would be to neutralize it,” said Kirk Savage, professor of history of art and architecture at the University of Pittsburgh, referring to the politicization of COVID-19 and the disproportionate effect the pandemic had on minority communities.

“If there were a national effort, it’s a huge lost opportunity not to deal with that,” Savage said. “I just think that’s almost the reason for having a national memorial, but once you start talking about that, you can forget congressional approval.”

“Don’t falsely impose harmony where there isn’t harmony,” Savage said. “The monument should become a way of promoting dialogue, rather than suppressing it.”

Though it’s “tricky to do,” he said a national memorial could be a space where “both those functions take place: healing and debate.” The dynamic could be captured through the design, with different “zones” for different functions, much like the Japanese American Memorial to Patriotism During World War II in D.C., Savage said.

“We do need some sort of permanent memorial,” New Jersey activist Samman said. “One that educates as well, so that people visiting 20, 30 years from now understand the trauma.”

Even if a national memorial does come to fruition, it’s likely more community ones will be erected, Savage said. That, in turn, will ensure as many people as possible are remembered.

“What families want is recognition for their loss,” Savage said.

Edited by Fern Siegel and Matthew B. Hall