Ogyen Shak fought to survive hardships, but has no recognized nationality. His restaurant now to helps define his life’s journey. 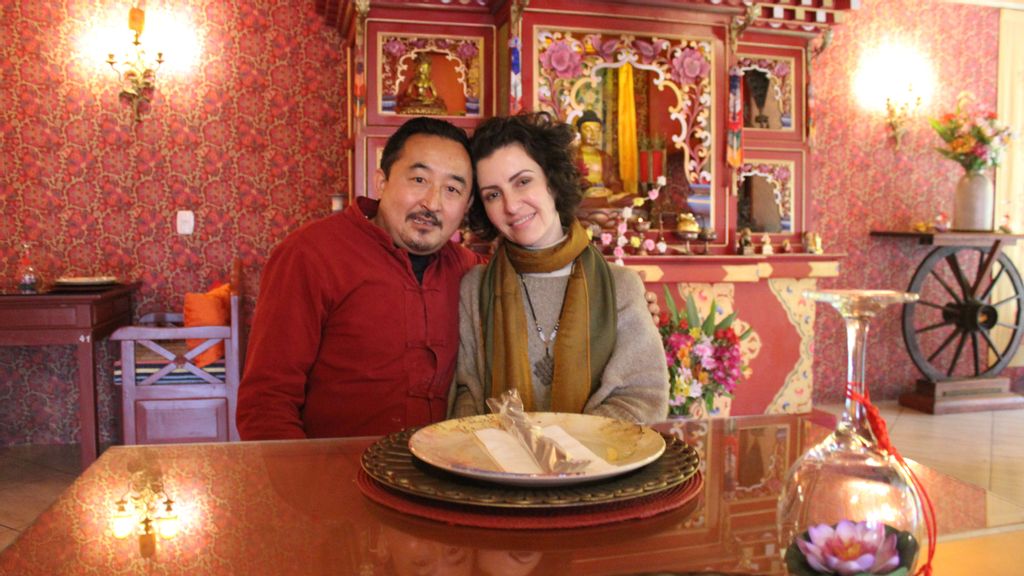 The story of 43-year-old Tibetan Ogyen Shak could be the script of a documentary or a book.

He fled the Chinese invasion of Tibet and lived in exile for a few years in India. He now lives in the municipality of Três Coroas, in Rio Grande do Sul, Brazil. Struggle and challenges led him to believe that everything is possible for those who follow their dreams.

Born in the Tibetan city of Derge, which in the local language means “land of mercy,” Shak is the son of farmers and lived his childhood in the mountains. At age 5, he was already helping his mother, Sonam Tao, milk yaks to make butter, which the family ate with tsampa, a traditional barley flour. Years later, his father, Tashi Choeyoung, got rid of his herd of yaks and started growing barley.

“At the age of 6, I went to live with my uncle, a great artist. He taught me a bit of Tibetan sacred art. Since I was a child, I had a great love for the arts and was  different from other children. I didn’t like to study,” he said.

He lived with his uncle for 10 years and learned to draw, paint, sculpt and make crafts and jewelry. He developed a taste for culinary arts, flavors and aromas in this period, too.

During the Chinese invasion of Tibet in 1950, his paternal grandparents were shot dead by soldiers in their home. His father said a dictator had taken over the government, and he wished for his children a life with rights, freedom of expression and well-being.

Shak vividly remembers the evening his father gathered the whole family to eat momos — steamed dumplings stuffed with meat, potatoes or vegetables — for dinner and made the announcement: “‘You, my children, from now on will live in India.’

“After that, my family and I emigrated to Lhasa, Tibet’s capital. We traveled by truck. I was 16, and the trip lasted about two weeks. We lived there for a while. I supported my family making art,” he said.

On the night of the escape, the family gathered under a bridge in Derge. A truck would smuggle about 30 migrants to Nepal, including Shak and his younger siblings, Tashi, Kunga and Tsering.

“Three moments marked my life; to this day, my chest hurts when I remember them,” he said.

The first one “was the farewell of my father and my mother. I have always wanted to know the world, so I was happy about the trip. However, as the truck moved on and the distance from my parents began growing, I felt great pain. &mldr; It looked like a movie scene, but I will never forget the pain. It was heartbreaking; I didn’t know if I would ever see them again.”

The truck took the migrants to an access point in the Himalayas.

“We walked the rest of the way through the frozen mountains. The group of Tibetans, including monks and nuns, slept in the snow during the day and walked at night hiding from the Chinese army guarding the region.”

The winter was harsh. During the 30-day journey, Shak witnessed the death of a child, which would be the second moment that marked his life. He had never seen a person die, least of all someone so defenseless.

A nun accompanied the group. “Before dying, she told me that, fearing the Chinese would steal them, she hid jewels in her pant seam. The nun asked me to give them to the Dalai Lama, requesting him to pray for her.”

While walking through the mountains on their journey to Kathmandu in Nepal, Shak and his companions burned bills to light bonfires that would help them fight the cold. He didn’t have suitable clothes but was determined to live. That was the third key moment Shak would never forget.

Shak survived and reunited with his siblings at Nepal’s border. The sudden warmer weather brought him severe pain and swelling in his arms and legs.

“I had gangrene. The doctor wanted to amputate my arms and legs. The government had no money to treat refugees, and I was in the hospital for more than a year,” he said. During this period, Shak’s siblings were transferred to a refugee camp in India, but he stayed in Nepal.

The young Tibetan had to undergo several surgeries.

“An American paid for all my treatment, but told me not to reach out to him later. To this day, I don’t know him. I don’t know his name; I don’t know where he lives or where he is from. I wanted to meet him one day and thank him personally, but I respect his decision,” said Shak.

A doctor amputated the toes of Shak’s left foot. In addition to paying for the hospital expenses, the protector fed him through his recovery.

The doctor discharged Shak after a year. Shak continued his journey to Dharamsala, in Himachal Pradesh, northern India, on the slopes of the Himalayas. In this city, he learned English and had the opportunity to meet the Dalai Lama. He also reunited with his siblings, who lived in a refugee camp. He stayed in Dharamsala for eight years and was able to see his parents again. But his dream didn’t stop there.

Life in Brazil and marriage

Shak traveled to Brazil in 2006 invited by a Brazilian woman he had met in India. Due to his mastery of visual arts, she asked Shak to help her decorate a Tibetan temple in São Paulo. Shak accepted the invitation and helped restore the Buddhist temple of Zu Lai in Cotia, a neighboring city to São Paulo, and renovate its paintings. The temple is considered the most prominent Buddhist shrine in Latin America.

Three years later, he traveled to the Chagdud Gonpa Khadro Ling Buddhist temple, in Três Coroas, in southern Brazil. There he met Adriana da Rocha, from Rio Grande do Sul, with whom he began a relationship.

“Drika,” as her friends call her, had lived 14 years isolated in the temple, on top of a mountain. After choosing to leave it, da Rocha married Shak.

The marriage prevented Shak’s deportation, as he could not renew his visa.

Today, Shak does not have a passport and cannot leave Brazil, not even to visit his parents. Tibet is not recognized as a country, so he is considered a person without a homeland. He works hard to become a Brazilian citizen and dreams of seeing his parents and family again.

Da Rocha Shak admitted the relationship with Shak was a bit difficult at first, despite both being Buddhists.

“You marry someone who doesn’t speak your language and has a completely different culture. We had some cultural conflicts, and we even have them today. Imagine, 14 years living in the temple, I go out, marry someone from another culture. &mldr; It’s very challenging,” she said.

Ten years ago, the couple decided to open the first Tibetan restaurant in Brazil: Espaço Tibet. Located in the municipality of Três Coroas, the business is close to the Khadro Ling Buddhist temple. Shak made all the decorations, following the style of Tibetan sacred art. The restaurant is a piece of Tibet embedded in the lands of Rio Grande do Sul.

Despite hardships, Shak emanates calmness and joy. He is attentive to his customers and the restaurant’s atmosphere. Appreciating the simple things in life, he reuses everything within his grasp.

“Today, Espaço Tibet is more than a restaurant. It speaks of my life journey. It is a dream that came true.

(Translated and edited by Gabriela Olmos.)